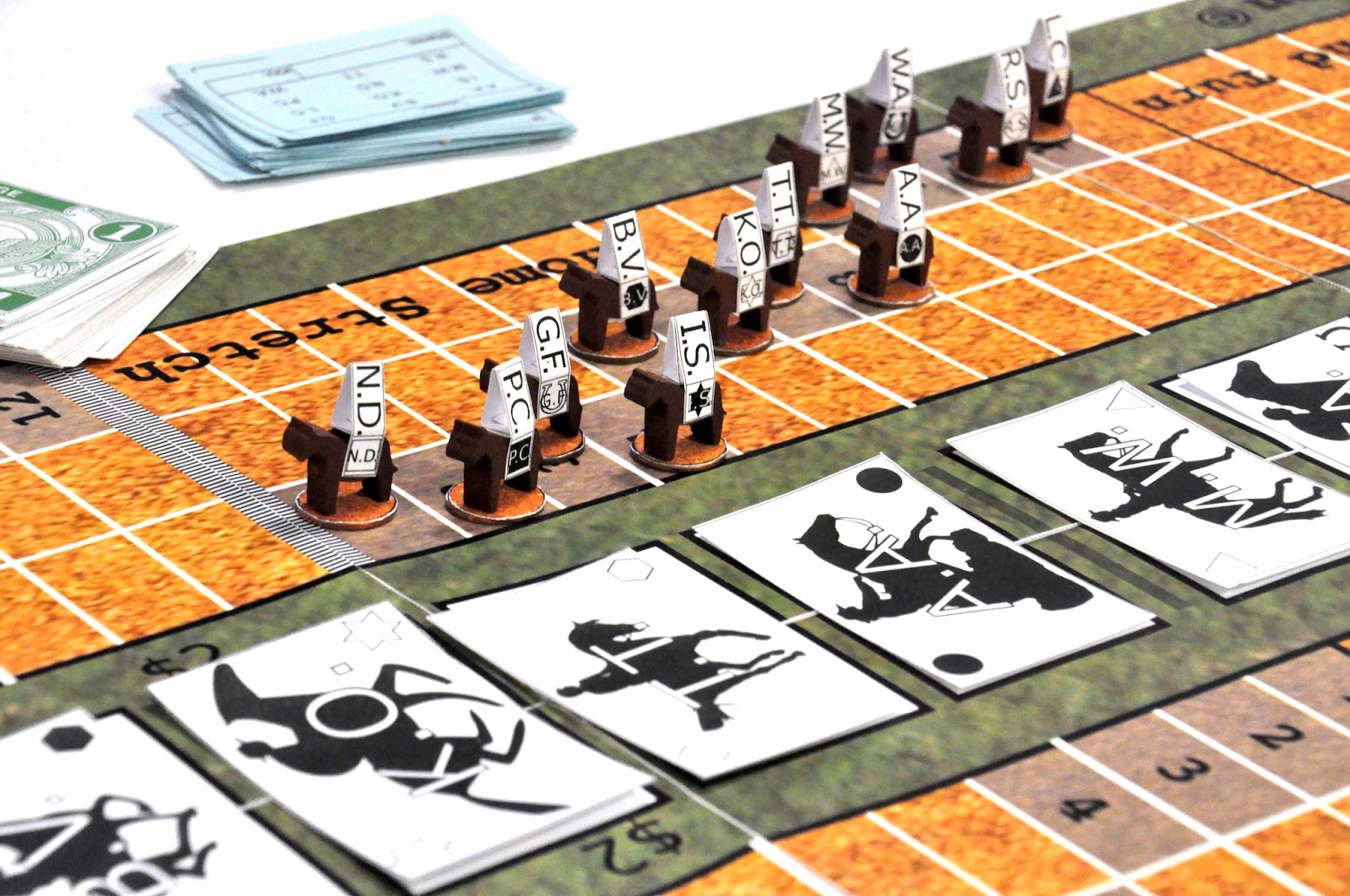 Working papers are where I review lessons learnt to help improve my board game designs and where I publicly brainstorm ideas.  Today I am going to talk about what lessons I learned about my game Post Position at UNPUB 4.


For those of you not familiar with Post Position here is a quick run down of the game.  If you are familiar with the game you can skip to the section titled “Lessons Learnt at UNPUB 4”.


Post Position is a stock market game with a horse racing theme for 3 to 12 players.  The goal of the game is to be the player that earns the most money at the end, although I like to say ‘if you have more than 100 dollars at the end you are a winner, if you have the most money you are the winner.’


Horses are moved five times in the race.  Players move the horses by secretly picking 3 horses on a straightaway and 2 horses on a turn to move.  After everyone writes down the horses they want to move, the orders are stacked in a pile to be read after the stock trading phase.


During a four minute stock trading phase people buy and sell stock with each other in horses. Players take advantage of their inside knowledge of horse movement to find horse stock that is mispriced.  Stock pays a dividend at the end of the race based on where the horse finishes.

Stock in the games comes from two sources.  At the start of the game the bank auctions a single share in each horse. The bank pays dividends to the shareholders who horses place 1st-6th.

The logic for selling a short position share is the same as selling a share by the bank.  I sell either share types if I think people are overvaluing a horse because it will finish worse in the race than what buyer believes.  I buy either share when I think the horse is undervalued because the horse is going to finish higher in the race than what the seller believes.

If (people) give you feedback that makes your game a completely different game ignore it, they are only creating their own game.  But, (if) they tell you what aspect of the game they don’t like, take it to heart because now you can start to craft it.

The major feedback I received from publishers was the theme did not match the mechanics.

Game Salute was worried people would expect one thing and get another.  With a title and theme like Post Position, people might expect a typical horse racing game only to discover after they start playing they had purchased an intense stock market game.

Or as Bruce from the Party Game cast put it, when you start playing the game the Chainsaw Of Math starts making a soft buzzing sound - Math Math Math Math.  Next thing you know the engine revs up and saws off your legs.

Bruce and Game Salute emphasized that there is nothing wrong with the game having a little math in it.  There are people who like math games and stock games.  The problem is when people expect a gentle bout around the racecourse, and instead discover they are in an intense game of market manipulation.

Eagle Griffin was concerned the theme did not match player actions.  Specifically, his concern centered on the relationship between stock ownership and horse movement.  Since players keep trading stock during the race, the horses players select to move vary based on what horse stock they purchased.  In real horse racing, horses do not do better in a race because people make bets on them.  Yet, this is what happens when people play Post Position.

He brainstormed with me a bunch of different ideas on how to make the theme consentient.  All of his ideas involved a complete retheme of the game to something like commodities or companies.

All of this feedback left me a little shaken.  Half of me went through a brainstorm of finding a new theme that drastically altered the setup of the game.  The other half of me urged restraint, and pointed out how those drastic changes created a whole different game.

At that moment I remembered the previous night when Bruce Vogel said I should make a convention version with My Little Ponies for horses. He envisioned the My Little Ponies being gambled over by a bunch of large leering men smoking cigars in a back room.  And that is when I it hit me… The Mob.  I can solve my theme problem with The Mob.

People already joke at the end game of Post Position when someone went horribly bankrupt that they were going to be tossed into the river. Who does that? The Mob. And who would have the power to rig the horses at the race track? Again, The Mob. So who are the players pretending to be when betting on horses at the race track in Post Position...mobsters.

I can remake the box cover to emphasize money and betting on the box front to clearly communicate the game involves math at the start to players.  I can even show a mobster paying off a jockey to let players know the race is fixed.

I rolled out the changes for my last game test at UNPUB 4.  I explained to players that they were all mobsters betting on horses with each other.  Bets on a horse paid 22 dollars if the horse finished 1st, 19 dollars if it finished 2nd, 16 if it finished 3rd etc. and bets on horses finishing in 7th place or lower paid nothing.  At the start of the race the house auctions off a single bet in each horse, but throughout the race mobsters can sell and buy bets with each other.  When mobsters sell and buy bets they each have some inside information on the horse race because their influence with the jockeys enables them to push a few horses ahead in the race.

So if your question is “oh, so you changed the game?” the answer is no.   I tweaked the theme to make the mechanic easier to pick up and to help new players to get into the game faster.

Tentative results from the first play testing are good.  The UNPUB 4 playtesters found the tweaked theme to be more intuitive.  I am going to formally rewrite the rules to better fit the thematic tweak and I will talk to some past play testers to see if they buy the theme alteration.  If yes, then I will roll out the newly crafted theme for general play testing.

Say (to yourself), somebody had a really negative reaction to that (part of my game), how can I make it better?