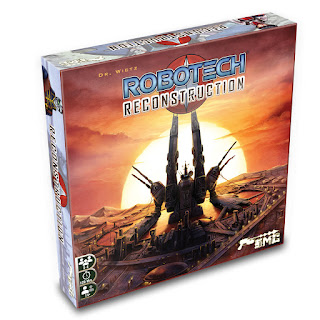 Ideology and politics flare during the period of reconstruction after the First Robotech War. Take on one of the 4 main factions as you vie to rebuild the world in your own image. You have a partial ally, a partial enemy, and a full enemy. Help you ally too much and you may lose the game; dedicate your efforts to inhibit your enemy and you may help your partial enemy toward victory. Heavily strategic and diplomatic.

Circus clowns pour out of their tiny clown car to form a small human pyramid. But one fool does not make it into the display and is smacked in the face with a pie for the entertainment of all.  You Fool, a a bluffing and negotiation game for 3-4 clowns by Button Shy Games.  Juggle your allegiances with other players to get ahead otherwise you may find yourself the fool.

Move and groove to be the first person to get to your section of Funkytown.  Funkytown is the November 2017 Postcard game from Button Shy Games Board Game of the Month Club.

Someone has stolen Mommy's Cookie! Work as a group to uncover the thief amongst you, but be-aware, some of your siblings may have alternative motives.

Are you a tough enough negotiator to thrive in New Jersey real estate?  Start with a handful of building permits and a fistful of cash, but not enough to construct a hotel on your own.  Make deals with other players to form partnerships to construct your real estate empire.  You must decide if you will hold out for wealth patrons or risk having to close your hotel because of a bed bug infestation.  Use the money earned from customers to expand your hold of Hoboken's hotel market.

The Don has passed away.  You're jockeying for control of the New Jersey Syndicate.  Place your cousins across the state of New Jersey, as you work to doge the suspicion of the FBI, and avoid power plays from rival factions.

Scramble to hire townspeople who assist your cattle drive as you race to catch the last cattle trains to Chicago.  Cattle car is a temporary deck builder where you build your hand by hiring townspeople to temporary work your ranch.  After you play a townsperson they return to town where they can be rehired by any player.


Meeple on Meeple football action as you strive to win the football game in overtime.  In Overtime players set up their own formations and then attempt to execute a play.   Will your offensive and defensive formations outwit your opponent or will their grit and determination overpower your team.

Railroads are only as good as their workers. For the railroad to survive, the train dispatcher and conductor must work together to ensure trains reach their destination on time without crashing. Will you be able to keep your job and the railway running in this 2 player co-op, or will you be given your pink slip at the end of the game?

Cargo needs a route to reach its destination.  Assemble a hodge podge set of lines into a national network, as you seek to gain leverage to strike deals with other players to ship goods using each other's railroads.

You have five minutes to trade your firm's investments in other banks to get rid of bad deposits to insure your firm has enough to prevent its collapse.

Racing through the city steers, players maneuver their cars through seven turns. Depending on how they handle through these turns will determine their position and ability to win the race.