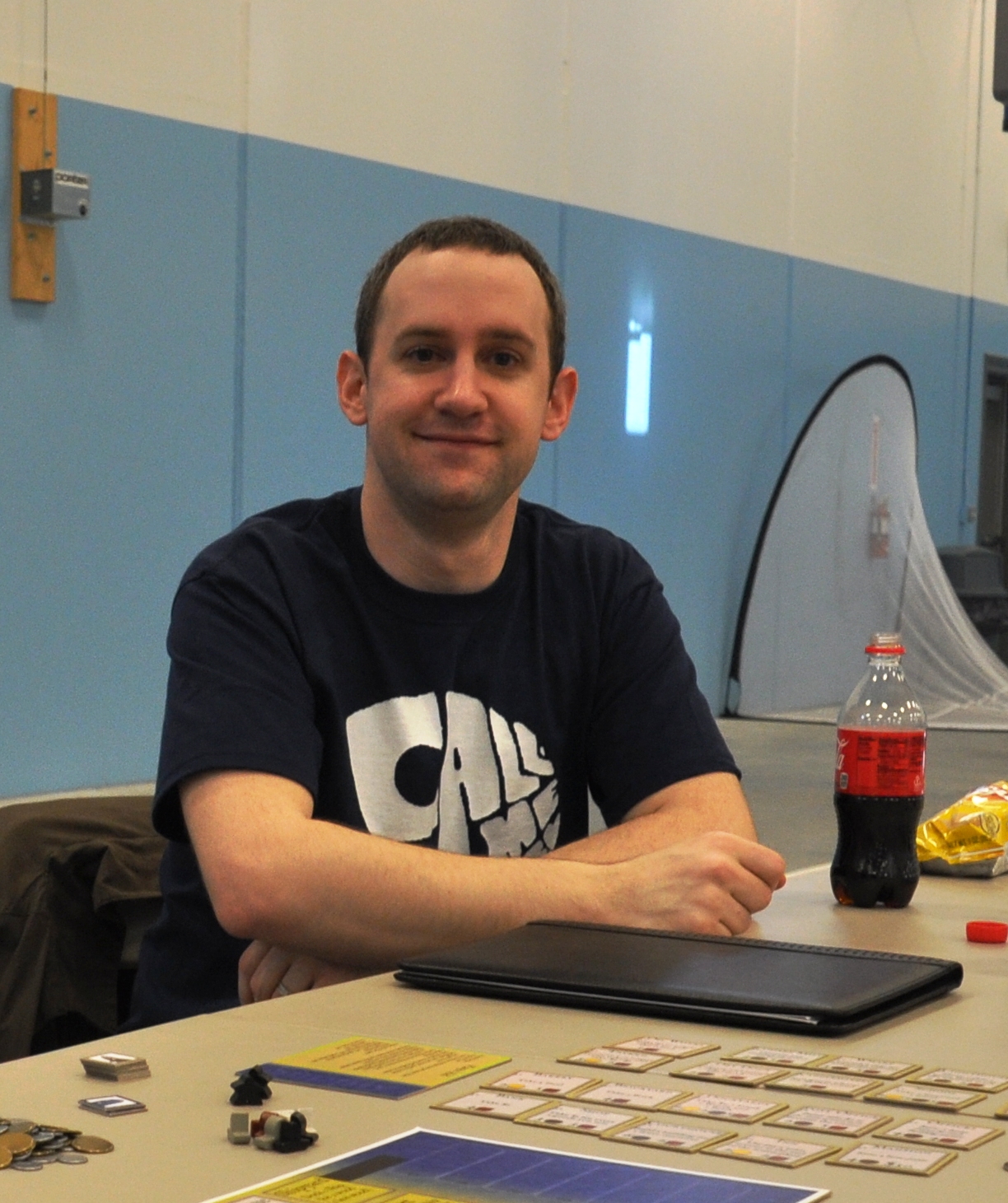 Just one more week till Congress of Gamers (http://www.congressofgamers.org/) in Bethesda, Maryland on September 28th & 29th.  I have been checking in with diffrent game designers that I have met on the UNPUB circuit who I know are also attending Congress of Gamers.  Today I am talking to Nathaniel Levan of Oak Leaf Games about his game New Bedford.

I met Nathaniel at UNPUB South Jersey 2013 when he was demoing New Bedford.

Nathaniel Levan: That was my first public showing of the game, and my first UNPUB event.  I had no idea what to expect at UNPUB South Jersey, but people said a lot of positive things about the game which encouraged me to  keep developing it.

Dr. Wictz:           Can you give us a quick rundown of New Bedford, which you will also be playtesting at Congress of Gamers?

Nathaniel Levan: New Bedford is a worker placement game about building a whaling town.  Players add actions to the game by building buildings and launch ships to compete for the best opportunity to catch whales.  Whaling uses an original “track” mechanic that balances the time players spend collecting whales with the competition as supply of whales decrease.


Dr. Wictz:           How does the “track” mechanic work?
Nathaniel Levan: Players have the ability to launch ships to the whaling track.  The ships farthest from shore get the best choice of the randomly drawn whale tokens.  Ships slowly move toward shore, which gives other players a chance to push their ships further out to sea and grab better whale tokens until you can launch another ship.  Meanwhile, you need to earn enough money to pay your ships crew when it returns to port.  Whale tokens are never returned to the supply, so as the game progresses it becomes harder to catch good whales.
Dr. Wictz:           How has New Bedford changed since you started presenting it UNPUB events?

Nathaniel Levan: There are a lot of small graphical changes, which is natural for a prototype.  Most of them were superficial changes that make it easier to pick up and learn the game.  But there was also a few big changes.  Thanks to input from Dr. Wictz, the main board was separated into two pieces, and the whaling mechanic was dramatically simplified.  Based on feedback from my last UNPUB event, I removed an entire resource.  Even after these changes the core gameplay is still the same, but the game is much more elegant and compelling.
Dr. Wictz:             What inspired the whaling theme in New Bedford?
Nathaniel Levan: I had been interested in developing a game about whaling since rereading Moby Dick a couple of years ago, but I didn’t really put the two together until I saw a documentary on PBS about whaling.  After that everything started to fit into place.  Moby Dick provides a  great slice of mythology and culture from the golden age of whaling that New Bedford draws upon for thematic inspiration.  At the same time, I wanted to keep specific references from the book out of the game so the game has its own identity.
Dr. Wictz:            How did you get into designing board games?
Nathaniel Levan:  I’m an engineer, so I naturally think about ways to rearrange and combine parts into something new.  I started writing down ideas and developed some fan expansions by tweaking game rules and borrowing rules from other games.  Then I moved on to developing whole mechanics and games based on what I have liked and dislike from other games.  I’ve been working on a number of designs, but New Bedford is the first one I have gotten into a playable form.

Dr. Wictz:            Why do you love making board games?
Nathaniel Levan: I love having interesting things to think about in my spare time.  Games let me combine that analytical portion of my brain with all of the random snippets of information I have gathered.
Dr. Wictz:            Any shout outs to your most dedicated game testers (cough cough, wife, gf, etc.)?

Nathaniel Levan: I’d like to thank my wife for both her moral support in the development, and practical support with the design.  When I have a problem with the game or add something new I ask her to take a look and she tells me what fits and what doesn’t.  She has really helped shaped the playing experience of New Bedford.  I’d also like to thank/apologize to my friends who put you with my continual requests for playtesting.
Dr. Wictz:           Thank you Nathaniel for stopping by and chatting.  You can learn more about New Bedford and Nathaniel’s other games by following his blog Oakleafgames.WordPress.com or by following him on facebook at Facebook.com/OakleafGames .