Games that use money: The Game of Life, Monopoly, Daytona 500, City Hall...the list goes on and on and on.  But for something that is so prevalent in board games, money as a mechanic is an understudied topic.  Why use money?  What is the purpose of a money mechanic?  And for the more philosophical folks out there, why do we even use money in real life?


Why do People Use Money?

Searching for the people I need to trade with to get an item the blacksmith is willing to exchange for the horseshoe I need to trade for a slice of pie takes a lot of time.  The time I spent searching is time I no longer have to relax or give other people back rubs in exchange for other things. 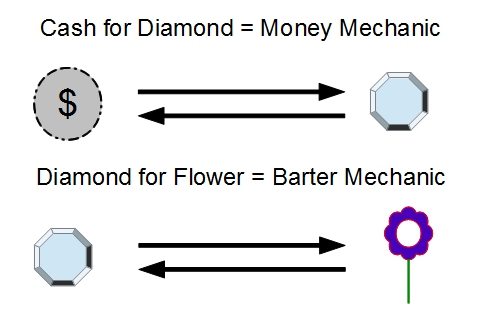 Money reduces the amount of time I spend searching to make trades by being a medium of exchange all buyers and sellers will accept.  If everything is priced in pounds of wheat then I no longer have to find the person supplying the exact good you want to trade for a piece of pie.  I only need to find enough people willing to pay me wheat for giving them back rubs to get a piece of pie.  You are willing to accept wheat in exchange for pie because the blacksmith is willing to accept wheat in exchange for a horse shoe.

A medium exchange can be a commodity, like wheat, or pieces of paper/coin we call money.  Money has the extra benefit (in real life) of being much easier to carry around then pounds of wheat.  Money can also be backed by a commodity or by nothing at all.  No matter the case, money is a tool to make it easier for people to trade with each other.

Use of Money as a Tool in Board Games

Money works best in board games when it simplifies trades.  Take The Game of Life.  All actions in the game can be reduced to whether or not you can exchange a single item to get a good or service.  Imagine playing Life where the Accountant gets paid by the Singer with a ticket for a rock concert.  How then does the Accountant pay the Doctor later in the game when their child gets sick.

One way the game could have accomplished this is to include a set of tables that informs players how much of each service can be exchange for another.  For example, it might say that 3 rock concert tickets are worth 1 doctor visit.  A table large enough to account for all the possibilities of exchanges in The Game of life would be fitting for an Avalon Hill game.  Instead the game simplifies game play and reduces components by translating the ratio of goods exchanged into equivalent ratios of money exchanged.  If it takes 3 rock concert tickets to pay for a doctors visit then in a world of money rock concert tickets earn 1 dollar a show and a doctor visit costs 3 dollars.

Money takes all actions in The Game of Life and turns them into a single unit that can easily be observed and exchanged for any other actions in the game.  No need for any complex formula or table of exchanges that eats up time and takes away from gameplay.

Settlers of Catan thrives on people navigating a barter economy.  Players have to navigate the process of trading wood for stone so they can trade stone for brick with another player.  They have to plan their cities and roads to acquire the commodities they need, both for trade and gameplay.

Imagine Settlers of Catan where settlements earn cash instead of a resource and construction was purely a matter of price.  Players would just focus on only placing the cities in locations that maximize earnings.  Decisions available to players would be reduced.  Players would no longer be interacting with each other over trading this for that.  In essence the game just became a new form of solitaire where you roll dice. Money reduces too much of the games complexity.

Money is only a theme if there is no exchange ever made with it.  Imagine a game where the person with the most money wins the game.  In this hypothetical game, you earn money by completing a task.  Once the money is earned you just hold onto it as a victory point for the end of the game.  The money is not used in any exchange.  Money, in this case is a theme for the victory points in the game.

Contrast this with the HoopCat’s game Fill the Barn.  In Fill the Barn the player with the most money wins the game.  However, players also need money to plant, fertilize, and harvest crops.  These are all actions within the game that might result in earning even more money.  So money is not just a victory point condition, money is also a way to exchange victory points you have now to take risks that might reward you with more victory points in the future. In this case money is being used as a tool to simplify exchange, making it a mechanic.