Why do People Trade?

Since we both value the goods we received in trade more than the good we exchange, we are both better off by making the trade.  This is true even if someone complains about the price of the exchange prior to trading.  If I spend the whole time arguing that the rubber duck is really worth two golf balls and not one, but I still exchange the rubber ducky for one golf ball, guess what, my reveal preference from the trade shows that I really value one golf ball more than a rubber ducky.

People complain about prices for a variety of reasons.  Much of the time they are just wishing they were able to get more bang for their buck.  If I was willing to accept one golf ball for a rubber ducky there is no question I would happily also accept two golf balls for a rubber ducky.

Notice we end up trading not only because we have things we value differently, but we each have something the other person wants.  If I had a rubber ducky and you a ripped t-shirt covered in horse poo, there is nothing I am willing to give you for your ripped t-shirt covered in horse poo.  I just do not want it and in a world of volunteer trading, I am not going to give you something to take it.

Trade in Board Games

If you are designing a game that utilizes a trade mechanic it needs to motivate players to value different goods differently.  When everything is worth exactly the same there is no need for player trades.  If a green cube is worth one victory point, and a red cube is worth one victory point,  players have no incentive within the game to exchange cubes.  Neither player gains any edge in gameplay by making an exchange.  They are in fact the same good that happen to be different colors.

Game designers desiring trade in their game need to also make sure trades exist where the players trading can benefit from the exchange.  I am not going to make an exchange with another player unless I think it helps me win the game.  The same goes with the person making the exchange with me.  A player is not going to trade me three stones in Settlers of Catan if it will enable me to upgrade a settlement to a city and provide me with the last victory point I need to win the game.

In the real world, when I trade maple syrup I made with the butcher for a pound of beef, neither one of us is worried that the trade is going to give the other person an edge to defeat the other.  I am excited because I now have some delicious beef to grill and the butcher is excited because he is going to use the maple syrup to glaze a ham.  The butcher making a glaze ham has no negative effects on me.  And me grilling some beef to eat has no negative effects on the butcher.

But in board games, every trade I make has the risk of hurting me by giving my competitor a new resource he can use to beat me.  That makes people guarded about the trades they make within a board game and makes it harder to construct a game where trading is a relevant mechanic to game play.

A game with a trading theme is a game where gameplay is centered on a story where a player makes a trade with a real person or some defined other to get a good.  In Acquire, people trade stock with a stock market.  In Monopoly, players trade property with each other as part of the theme on making real estate deals.  Settlers of Catan, players exchange goods with each other to represent trade between different colonists on an island.

Acquire is a trade themed game without a trade mechanic.  Players are not making trades with each other.  Stock buying in Acquired is just the theme for making strategic bets.  The bank does not benefit when players buy stocks.  It merely converts money from one value to the next based on a formula that calculates a number based on laying of tiles on the game board. 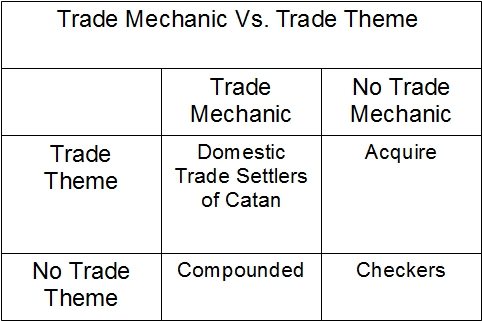 Paying rent on property in Monopoly is not a trade mechanic either.  Players are forced to pay rent by the rules of the game.  Players do not negotiate with different property owners over which property to rent and enter into a voluntary agreement.  They are told by dice rolls that you must rent this property and pay this fixed rent.  Otherwise, you are not playing the game.

In short, to prevent confusion over whether a game has a game mechanic or not you can always rely on answering a simple question.  Do players voluntarily exchange with each other?   For the game to contain a trade mechanic then players must engage in exchange voluntarily.