The Winner's Curse: A Primer for Board Gamers

As a student of economics I have long known the perils of the Winner's Curse in everyday life.  But I did not realize the havoc wrought on Board Games by the Winner's Curse till Cardboard Edison tweeted for help on a design challenge with their game Cottage Industry.


Can we prevent a player from ruining their play experience with a bad decision? How to penalize a bad choice without making the game unfun?
— Cardboard Edison (@CardboardEdison) October 15, 2013

.@HerrohGrant What about a player blowing all their money on a single auction?
— Cardboard Edison (@CardboardEdison) October 15, 2013

@CardboardEdison @HerrohGrant In the example was spending all of their money the right thing to do tactically or a mispricing of the good?
— Dr. Wictz (@drwictz) October 15, 2013

@drwictz @herrohgrant Mispricing. Overbidding early on left them with no $ (or options) later. We're talking about income to mitigate this.
— Cardboard Edison (@CardboardEdison) October 16, 2013

The Winner Curses explains why the player winning the auction in Cottage Industry was losing the game.  More specifically, the Winner curse explains what makes winning an auction so dangerous to a game player and why highly rational game player make the mistake of overbidding in a game.

To understand the Winner's Curse, the dangers of auctions, and the risk of over bidding in a game, we first need a quick understanding of the concept of Rational Expectations.  One application of rational expectation is finding the true value of something by asking a bunch of people and calculating the average answer.  The assumption is that people's observations on average are correct.  So, if we were to ask a large group of people how much earning an Economics PhD altered lifetime earnings, the average answer will be correct.

Why does this matter for an auction and for board gaming?

When you conduct an auction in a board game (1), every player makes an estimate internally on how much is something worth in the game (2).  Rational expectations tells us that the average value calculated by all the players is the true value of the item up for auction.  But the player who wins the auction is the player who has the highest bid. 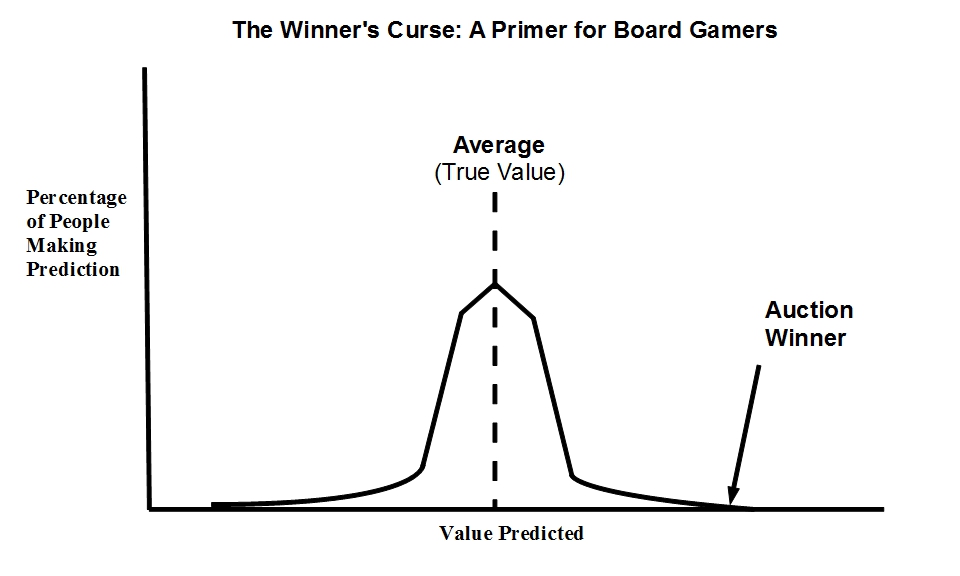 The highest bid is not the average value.  Rational expectations tells us that the highest bid is the person who overestimated the true value of the item the most.  So it should be no surprise when the winner of an auction in a board game suffers from the winner's curse when they overpay for an item.

(1)Auction where only the highest bidder pays the highest bid.
(2) We are assuming that the item has the same value to all players in terms of helping them win the game.